The schemes are part of the 1,800 Bee Network proposal which will create £6 billion in benefits across Greater Manchester 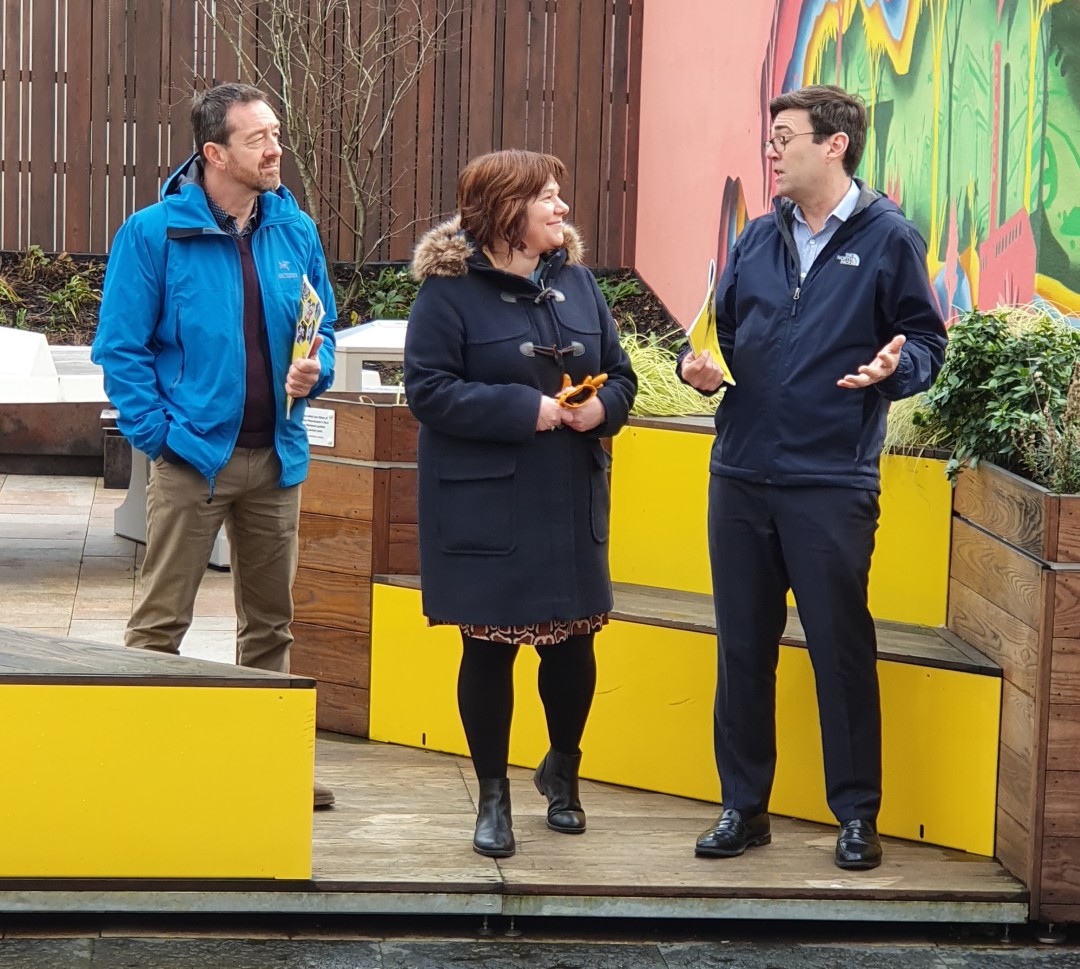 The Mayor of Greater Manchester and the Cycling and Walking Commissioner are calling on the Government to back ground-breaking plans for the UK’s largest walking and cycling network, cutting congestion and air pollution across the city-region and helping people make 2.5 million journeys every day on foot or by bike.

Andy Burnham and Olympic gold medallist Chris Boardman were in Stockport today, Tuesday, January 28, announcing the publication of a new report, titled ‘Change a Region to Change a Nation’, which will be delivered to Westminster next month to make the case for the government backing needed to deliver the wide-ranging plans.

The foundation of the plan is the Bee Network, which will provide 1,800 miles of protected space for cycling and walking and has seen over 80 further schemes approved for development.

Three of these schemes come from Stockport and amount to £10.8m. The schemes include a high-quality link for pedestrians and cyclists between Edgeley and Stockport town centre, connecting with the proposed Stockport Interchange Bridge.

The other two schemes have been formulated with input by community groups, Walk Ride Heatons and Walk Ride Romiley.

One is to create a proposal that will improve the experience for people travelling on foot or by bike across the Four Heatons. Along with new routes and crossings, the scheme will also include cycle parking and pocket parklets, making the area more pleasant and attractive and encouraging more active travel in the local neighbourhoods.

The other is Romiley Neighbourhood Links, which will use similar initiatives to make cycling and walking easier and safer, as well as including community projects such as parklets and trampolines and a safe cycle route via Werneth and Harrytown high schools.

Combined, these measures will allow children to walk or ride to school safely - giving people the option to leave the car at home.

It is also projected that the change in travel culture will bring huge benefits to the city-region in several key areas, including:

· Air quality: Up to 130,000 fewer daily private car and taxi trips (735,000 less vehicle kilometres driven)2
· Congestion: Reduce traffic by as much as 10% and improve some journey times by up to 50%3
· Health: A £6.73 billion boost by improving the city-region’s health and reducing the cost to the NHS4

So far, in total Stockport has 14 schemes in development, nine of which were put out for public consultation in Autumn 2019.

Following engagement from the local communities, the feedback is being collated and designs will be revised as necessary to reflect what the people of Stockport have asked to see. You can read the consultation report in to the schemes here

“Our city-region’s 10 districts have been working on these plans since 2017 and crucially, residents have helped to develop them, based on what they want their neighbourhoods to look like.

“Now we have a world-class plan and we know how to deliver it, but we cannot do it alone. We need the Government to back us with sustained funding over the next ten years to enable us to complete the Bee Network. If they do so they will be helping create a model that can be replicated across the rest of the country.

“Put simply, if they help us change our city-region, we can help change the country too.”

Cycling and Walking Commissioner for Greater Manchester, Chris Boardman, said: “With one in three car journeys in Greater Manchester being less than 1 kilometre, it’s clear we have to change. It’s impacting our air, our health, and the place we’re expecting our children to grow up, get on and grow old.

“All 10 Greater Manchester councils have taken on this challenge and they’ve already started transforming ambition into action. But without guaranteed government investment, we are hamstrung. To revolutionise travel across a whole city region we’re asking for the same financial backing over a ten-year period as it’s costing for a single junction improvement scheme in Bedford. I know which will return the best investment – not only for our city-region but the nation as a whole.”

Cllr David Meller, Cabinet Member for Economy and Regeneration at Stockport Council, said the proposed schemes would help encourage residents to access their local areas and the town centre.

“Public transport, as shown with our commitment to Metrolink and better buses and improving the borough’s walking and cycling links are key priorities of mine,” he added.

“These improvements will not only make the areas of Heatons and Romiley safer for cyclists and pedestrians, but hopefully give people added confidence in getting out and about in town centre on foot or by bike via Thomson Street.

“Creating new walking and cycling routes shows the council’s ambitions to change the mind set of how our residents travel around the borough. Our proposals also showcase our belief in the Greater Manchester Cycle Bee Network and the positives that it will bring to the environment and the region as a whole."

To view the report and to find out more about the Bee Network, visit https://tfgm.com/made-to-move/publications.