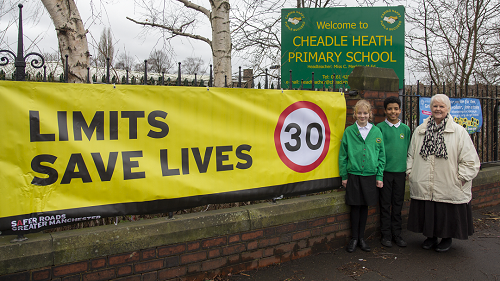 Stockport Council is busy installing new speed awareness signs on roads close to schools in a bid to inform residents of the speed limit as part of a Greater Manchester-wide campaign.

The council’s Road Safety Team will be installing the signs close to schools in conjunction with GM-based Safer Roads Partnership. Banners will also be placed on railings next to school entrances.

The partnership is calling on motorists to think differently about how they drive and the journeys they are going to make, before getting behind the wheel.

The first signs were installed outside Cheadle Heath Primary School in early February, with the role out to continue to other school’s within the borough over the next 18 months.

Statistics show that speeding over the limit kills or seriously injuries 21% of people involved in crashes in Greater Manchester, while up to 40% of car journeys exceed speed limit.

On average, 681 people have been killed or seriously injured on Greater Manchester’s roads each year over the last five years. In 2020, 67 people died, the highest number over the five-year period (54, 50, 50 and 63 deaths were recorded between 2016 and 2019 respectively).