Local school children have joined the Mayor and local Councillors to officially open a park they helped design on Blackstone Road in Offerton. 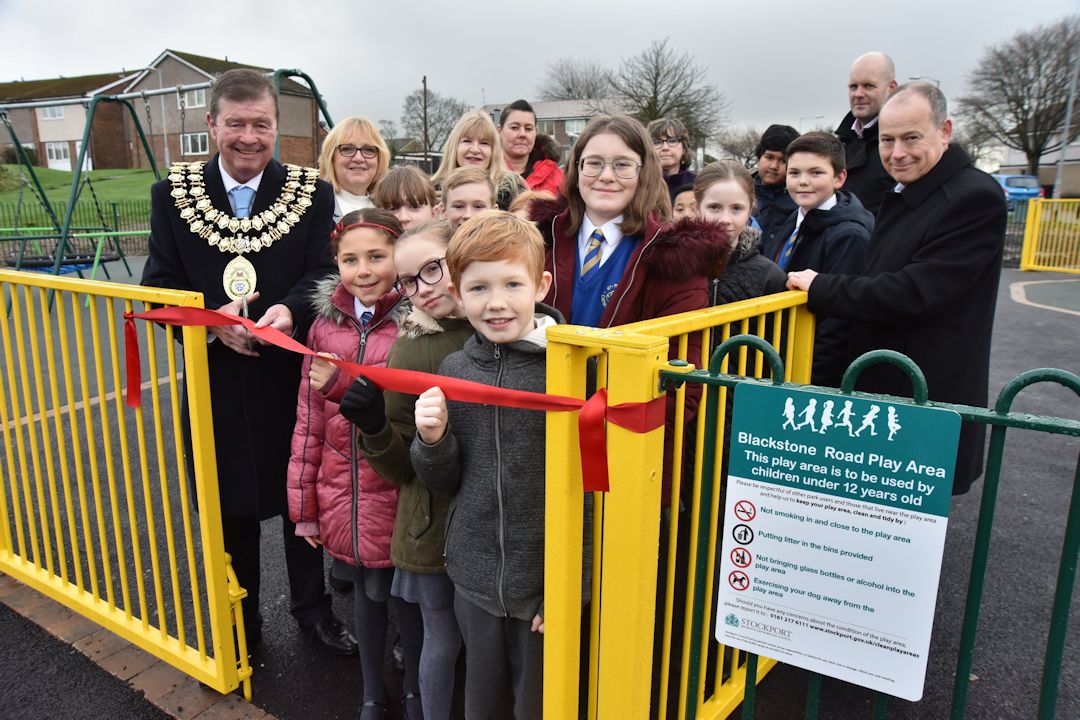 The Council wanted the local community to be involved in helping to design the new play area that was being created thanks to the Blackstone Fields housing development, and has been working with the local primary schools to make this happen.

Every pupil at St Philip’s Catholic Primary School and Dial Park Primary School, from reception to year six, was given the chance to vote on the play equipment they would like to see in the park. The response was fantastic and the Swingo, access whirl roundabout and bustling bumblebee proved firm favourites.

As well as giving their pupils a say, the schools also decided to work together and use the vote as a chance for their students to give back to the wider community, using the vote to raise money for the Manchester Emergency Fund for victims of the Manchester Arena bombing.

“I’m delighted that the play area on Blackstone Road has opened. There has been a real excitement about the park since the school pupils got to choose what would be there for them, and I am sure it will be somewhere local children enjoy going to play and be outdoors for many years to come,” commented Councillor Sheila Bailey, Cabinet Member for Communities and Housing at Stockport Council.

Carole Hogan, Headteacher at St Philip’s Catholic Primary School said: "The children from St Philip's really enjoyed being able to cast their vote to enable them to be involved in the decision-making process. It was wonderful for them then to see how the playground then became a reality."

James Clark, Headteacher at Dial Park Primary School commented: “What started as a simple vote for play equipment took on a new meaning with the tragedy that unfolded at the MEN arena. We wanted to do something positive. The children voted with their own money which they knew would benefit victims of the bombing. They felt pride in contributing to something much bigger than the play area itself. It was fantastic to see both the response from our whole school community and that one piece of winning play equipment featured a bee, the symbol which unites our wider Manchester community.”