Greater Manchester leaders are calling on businesses and residents to shape proposals to clean up dirty air, the most serious environmental health issue facing the city-region. 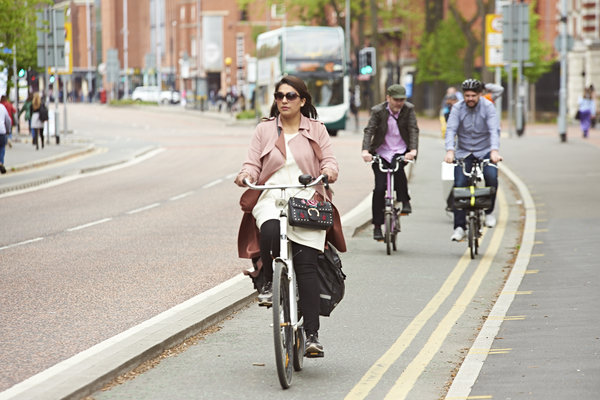 Greater Manchester leaders are calling on businesses and residents to help shape proposals to clean up dirty air at the roadside, the most serious environmental health issue facing the city-region.

The ‘Greater Manchester Clean Air Plan to tackle nitrogen dioxide (NO2) exceedances’ (GM Clean Air Plan) proposes a package of measures to significantly reduce NO2 emissions from the most polluting road vehicles, which are linked to a range of serious health problems and reduced life expectancy.

Poor air quality is the largest environmental public health issue facing the UK, with air pollution estimated to contribute to the equivalent of 1,200 deaths in Greater Manchester each year.

A seven-week clean air conversation runs until Sunday 30 June. More information is available at cleanairgm.com, where people can fill out a survey to give detailed feedback on the GM Clean Air Plan proposals, which include:
• an unprecedented £116m upgrade programme to clean up the city-region’s bus, coach, minibus, HGV, taxi and van fleets over the next two-to-four years
• a Clean Air Zone covering all 10 Greater Manchester local council areas with a population of nearly three million people across 500 square miles, the largest proposed Clean Air Zone outside London. The zone would mean that high-polluting, non-compliant HGVs, buses, coaches, taxis, private hire vehicles, vans, motorhomes, motorised horseboxes (with a maximum weight of 3.5 tonnes when not carrying a load) and minibuses – but not cars – would be subject to a daily penalty to travel in Greater Manchester
• significant investment in 600 new public rapid electric vehicle charging points across the city-region – nearly trebling the size of the GMEV electric charging network.
Greater Manchester’s proposals include a request to national government for a major package of funding to help clean up Greater Manchester’s air while supporting businesses to upgrade vehicles and sustaining economic growth.

The proposed Clean Air Zone would be implemented from 2021 and would initially mean that buses, coaches, HGVs, taxis and private hire vehicles that do not meet emission standards would be required to pay a daily penalty to drive in Greater Manchester.

From 2023 the Clean Air Zone would also include non-compliant vans, minibuses, motorhomes and motorised horseboxes – when the availability of compliant vans on the market will make switching a viable option.

“Business input will be crucial to make sure the detailed plan offers the right support for business, from sole traders to large companies. So I’d urge all businesses across our region to find out about the proposals and give their feedback on this very important issue.”

Once the conversation responses have been used to further develop the Greater Clean Air Plan, a statutory public consultation will take place on detailed proposals.

A final business case for the GM Clean Air Plan would be developed by the end of 2019, following public consultation, and subject to further local authority approvals.

Cllr Jude Wells, Stockport Council’s Cabinet Member for Adult Care and Health, said: “Stockport Council recognises that cleaner air and these proposals to improve air quality are important issues. By working with Transport for Greater Manchester, we’re hoping to make a real difference to air pollution in the borough.

"Therefore, we are encouraging local residents and businesses to join the conversation and have their say on these proposals.”

To find out more and take part in the survey, visit the Clean Air Greater Manchester website.